What Would Jello Do? Part 60: Live From Tornillo, TX 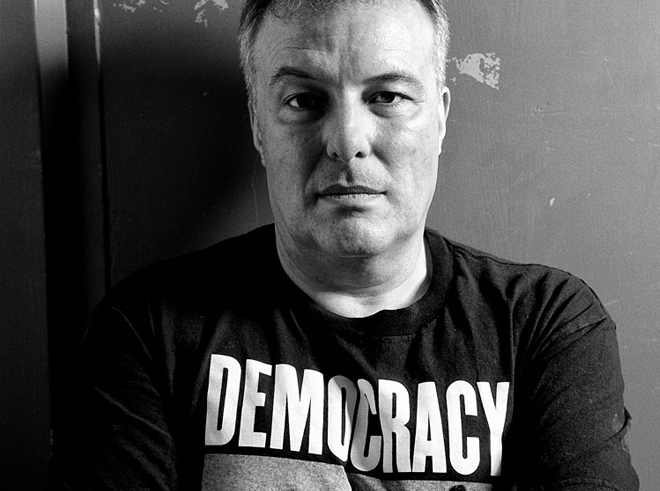 For this episode of “What Would Jello Do?”, Jello Biafra travels to Tornillo, Texas to participate in the protest rally there.  While he was there he recorded a new episode.
Due to wind noise obscuring the sound at some points, here is a transcript of what Jello’s speech:

“Welcome to another edition of “What Would Jello Do?”!
Back behind us is the checkpoint outside of Tornillo Bridge, outside of Tornillo, TX, where it’s all going down. But behind these fences there is those tents you’ve seen the aerial pictures of! The ones that look like the double wide of the San Quintin Gas Chamber? As one of the speakers at this rally pointed out, kidnapping children like this, it’s not just an impeachable offense, that is arguably a WAR CRIME. Not just impeaching the Trump administration for kidnapping, but yanking children, even from some breastfeeding mothers, locking them up in places like that. Scattering them who knows where, so their parents can’t even find them, and the government doesn’t even know where they are…THAT is a crime against humanity. A WAR CRIME. THAT is where impeachment could go and should go.
As one side said, deport the racists, not the kids…and there is more to come, see you shortly.
Now it’s time for part 2 of What Would Jello Do?!
Behind me is the wall that was built before the big, beautiful wall that is hopefully never going to be built. I think THIS actually goes back to the George W Bush administration, and Rio Grande River is on the other side of it.
Over here is a place that is currently called “The Hole In The Wall”. It’s just a few miles from the location in Tornillo.
This is where they have been keeping underage kids that came across on their own. Where they can’t find family on either side of the border to release them to. Apparently not a sponsor either, but I don’t know how hard they’ve tried. From what I’m told, there are dormitories, schools, and other things and it’s not just putting people in a tent far away from everyone else and forgetting about them. Yet, not even this comes close to something that was actually WORKING earlier that could have prevented this whole thing!
Called the FAMILY CASE MANAGEMENT PROGRAM, it’s where they would take the families that came across. No jails, they put them in a cottage situation and try to find sponsors, and it was an honor system to when you came to court. According to PBS, or Huff Post, or both, they had 99% compliance for court dates, 97% for prior check-ins with case managers, and even though it was run by a private prison company called GEO, GEO-CARE in this case, costing $36 per FAMILY, the whole family per DAY, instead of $300-$400 per head in Trump’s Baby Jails. We need to bring back the FAMILY CASE MANAGEMENT PROGRAM, that Trump quietly abolished when he first took office, and nobody reported on it because they were too busy reporting on Russia and the Floozies over and over and over again.
FAMILY CASE MANAGEMENT PROGRAM. Bring it back.”