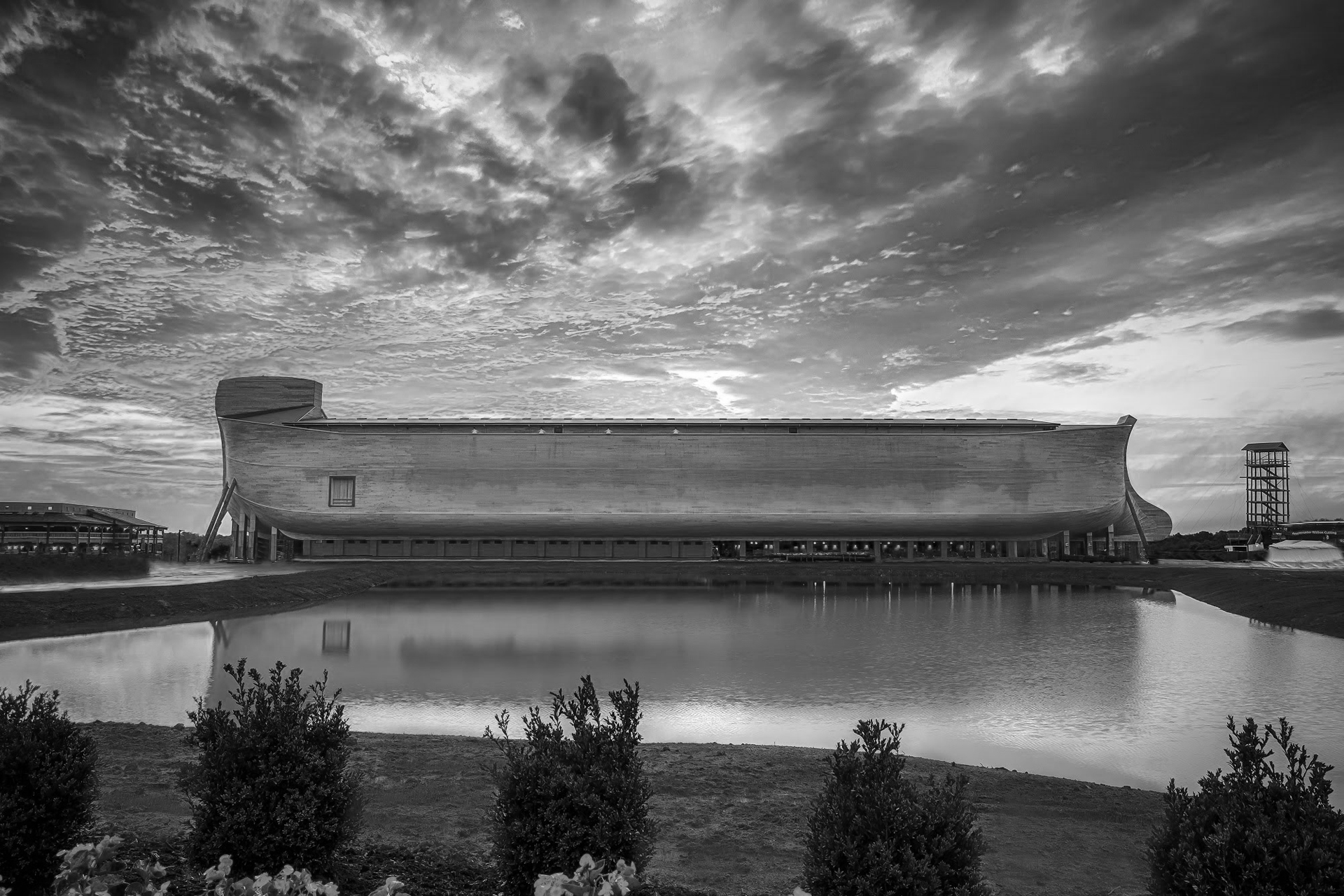 Sam Miserendino, author of the graphic novel Prince of Pieces, and parody books If You Give A Bunny A Beer and If You Give A Bear A Bong, had an opportunity on a road trip to visit the Kentucky based religious themed attraction, Ark Encounter. In the following hilarious article he shares his experiences.

We couldn’t resist posting this.

As many of you know, I’ve long been fascinated with the sheer dementia displayed time and time again by our dear friends on the extreme fundamentalist Christian right. From my teen fascination with Chick Publications and crackpot TV preachers for profit, to the Snake Handlers and Mike Pences of today, I’ve long gotten my best info out of their own pens and mouths,  instead of their many lefty detractors.
So far I haven’t actually been able to attend the taking up of serpents, teen abstinence rallies, Pro-“life” Haunted  Houses, or even a Xian Rockfest that got conned into booking the Knights of the New Crusade.
So check out this survivor’s encounter with an honest-to-god Noah’s Ark creationist theme park. Not only is this hilarious, but keep in mind that living amongst us are untold hordes who actually believe this shit! Pence, Palin, DeVos DeStroying public skools to, “Bring children closer to god”, Priutt, Zinke’s stinky to, “Drill,baby, drill”.
Also moving our embassy to Jerusalem, in hopes of triggering the mother of all Intifadas. All to jump start the End Times, and make sure Israel’s borders finally expand to where those fundamentalist Christians funding the Settlers want it, so that Jesus will come back, and on their terms.
Let’s not forget that somewhere in the First Pussy-grabber’s mind is some pretty hardline religion – Trump was raised in the church of bigtime preacher for profit Norman Vincent Peale, and he even did The Don and Ivana’s wedding.
So will someone pleeeeze corner Trumpamuck at one of his off the cuff press conferences, and ask him if he believes in the End Times? That could explain a lot.
And also keep in mind this fake ark and gift shop were built using Kentucky taxpayers’ money!

Yours in Frankenchrist,
J. Biafra

After five hours of driving on Interstate 75 through Georgia and Kentucky, I had become inured to the dull sameness of the signs alerting me to the options that awaited at the next exit – McDonalds, Burger King, Cracker Barrel and KFC.  However. as I approached exit 154 to Williamstown, Kentucky the monotony was broken by a sign that promised, instead of the usual suspects, an Ark Encounter!

The Ark Encounter is a Christian evangelical and fundamentalist theme park operated by Answers In Genesis – a young earth creationist group.  As the name of the Encounter suggests, the star of the attraction is a reproduction of Noah’s Ark which is built to biblical specifications: 300 cubits long, 30 cubits high and 50 cubits wide (for those of you who are rusty on your cubits, that’s 510 ft. long, 51 ft. high and 85 feet wide).  According to the Ark Encounter’s website, the purpose of the attraction is to equip visitors to “understand the reality of the events that are recorded in the book of Genesis.” (www.arkencounter.com) ;

Construction of the Ark began in 2014.  It was built in accordance with God’s shipbuilding instructions, utilizing the technology and methods that were available 4,300 years ago.  This accomplishment is, for Answers In Genesis, evidence for the truth of the biblical account of Noah’s Ark.  Of course, certain concessions had to be made.  According to the bible, Noah was 500 years old when he built the Ark and it took him 75 years.  500 year-old shipbuilders being in short supply these days, Answers In Genesis relied instead on a construction firm and 1,000 craftsmen.
The Ark Encounter also had to forego using wooden pegs to hold the Ark together, as originally planned, in deference to the applicable building codes.  Apparently God is much more lax than the state of Kentucky when it comes to safety standards.
The Ark Encounter does not, however, have to defer to any secular authorities when it comes to hiring practices.  Answers In Genesis requires all job applicants to, among other things, profess that they are Christians; sign a statement of faith attesting to their belief in young earth creationism and acknowledge that homosexuality is a sin.  That’s good news for job-seeking Christians but bad news for people like…well, like Noah, who because of his religious affiliation couldn’t even get a job driving the shuttle that ferries visitors from the parking lot to the Ark.  Nor could his son Shem grill hot dogs at the snack shack that bears his name.
When I stopped at the Ark Encounter I was on my way home from a horror convention in Atlanta where I was selling my graphic novel Prince of Pieces.  The book is a satirical horror story about the Second Coming and bears the tagline “For two-thousand years you’ve been eating His flesh and drinking His blood…Now it’s His turn!”  So, when I pulled into the Encounter’s parking lot I had a trunk full of books about Jesus coming back as a flesh-eating ghoul. It wasn’t easy, but I resisted the temptation to leave a few copies in the gift shop.
One of the first things I noticed when I disembarked from the shuttle, was that virtually everything in the park is made of wood.  I assume this is intended to create an aura of authenticity as well as to reinforce the notion that anything is possible with wood.  The ring of authenticity is rendered somewhat hollow by the presence of snack shops and vending machines on the Ark which, to the best of my recollection, are nowhere to be found in Genesis.
The Ark has three decks and each deck is filled with exhibits.  The thread that runs through all of the exhibits is contortion – contorting science, contorting logic, contorting pretty much anything necessary to impress upon the visitor the reality of the biblical account of Noah’s Ark.  I would say “convince”, but it was clear that most visitors on the day I was there were not in any need of convincing.

There is no shortage of animatronic Noahs to assist in the Ark Encounter’s educational efforts.  Visitors are treated to Noah praying as the deluge begins as well as a Noah who explains how long it took him to build the Ark.  This led led me to an idea that Answers In Genesis seems not have considered; perhaps he Ark was built not by one Noah, but by a legion of animatronic Noahs.  Absurd?  If I learned nothing else from the Ark Encounter it is this – do not let implausibility get in the way of a good theory.

Noah explaining how long it took him to build the Ark.
And, I might add, looking rather spry for a 600 year old man.

My favorite exhibits were those dealing with dinosaurs which, in my ignorance, I didn’t even know were on the Ark. One would think that keeping dinosaurs (as well as large land mammals) in such a small space would have posed a very serious problem for Noah.  One would be mistaken.  According to the Ark Encounter, the solution to that problem is that large species were represented by juveniles.  The added bonus of this, according to the Ark Encounter, is that juveniles would have been hardier and therefore better able to endure the rigors of life on the Ark.  But the most exciting thing I learned about dinosaurs at the Encounter is that they might still be around.  Since extinction flies in the face of the perfection of God’s creation, all dinosaurs exhibited at the Ark are only “presumed” extinct.  Pretty thrilling news for anyone who’s dreamed of seeing a real live dinosaur someday!

A few of the Dinosaurs that were on the Ark!

The exhibits also answered one of my biggest questions about the Ark – what the hell did the carnivores eat? The answer: either pre-flood “carnivores” were really herbivores who only became carnivores after the flood (no doubt due to surrounded by all of that tasty meat for 377 days) or they went vegetarian for the duration of the trip. Apparently it’s true that with God all things are possible.

Another major question the Ark Encounter resolves is how Noah was able to fit two of every animal on the boat. You see, it wasn’t two of every animal it was two of every “kind” of animal. According to Answers In Genesis, a “kind” is a common ancestor from which subsequent species arose. For example, there were two elephants of a certain “kind” on the Ark and those gave rise to the variety of elephant species that exist today. Pretty clever.

The topics covered at the attraction range from the theological (How do we know the bible is true?) to the scatological (How was animal waste removed from the Ark?). The Ark Encounter’s solution to the problem of waste management is plucked right out of the Flintstones. One of Noah’s sons would dump the excrement down a shaft that led to a chamber located in the lowest deck. There, one of his other sons (his least favorite, no doubt) shoveled the waste into buckets that were attached to a pulley system powered by an elephant walking in a wheel. The buckets were then drawn up and discharged their contents into a shaft that led out into the floodwaters. You can witness this marvel of Bedrockian technology here:

Imagine my disappointment when I went to the restroom and discovered that instead of using buckets powered by a wheel walking elephant, the Ark Encounter relies on uninspired modern plumbing.

Another interesting thing I learned at the Ark Encounter is that all humans on earth today are descendants of Noah’s three sons and their wives. Each of the wives is from a different racial group, which accounts for the diversity we see today. The chart below illustrates the racial/ethnic groups that flowed from each couple.

Answers In Genesis reserves special ire for cute portrayals of Noah’s Ark in children’s books.  At the entrance to the room that contains this particular exhibit there’s a plaque with a red snake wrapped around it.  The plaque reads: “If I can convince you that the flood was not real, then I can convince you that Heaven and Hell are not real.”  The exhibit warns of the “7 D’s of Deception”  that lead people to disbelieve the truth of the Ark Story. And just in case you didn’t know, the “7 D’s” are:  Disregarding God’s Word; Distorting the Message; Deceptively Cute; Discrediting the Truth; Destructive For All Ages; Disorienting the Reader and Defaming God’s Character.  According to the exhibit, such portrayals diminish the story of the Flood as an important lesson about the “righteous and holy God judging a sinful world.”  Of the 7 D’s, “Deceptively Cute” proved the most ironic since the gift shop waiting at the end of the tour is filled with cute stuffed animals and t-shirts.  I guess when it comes to making a dollar, even the Ark Encounter is willing to risk incurring the Lord’s wrath.

Beware the deceptively cute…unless it’s for sale in our gift shop.

The Ark Encounter emphasizes that per God’s shipbuilding instructions, the Ark had only one door through which it could be entered or exited.  The lone exit from the replica Ark leads, as the immutable laws of attractions apparently dictates, through the gift shop.  Given the Ark Encounter’s fidelity to biblical accuracy this left me to wonder –  after 377 days on the Ark, did Noah, his family and the animals exit through the gift shop as well?