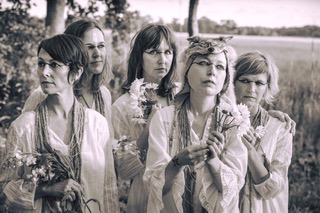 Featuring former members of The Causey Way and Pilot Scott Tracy, THE SILVER MACHINE from Savannah, GA will be releasing their debut LP “Standing On The Bare Ground” on Alternative Tentacles Records on March 1st, 2019.

The thing She wanted, more than any other thing, was to drum.

She wanted to find the central vein of the cosmos, to sync heartbeats with the pulse of the universe. Born from ancient ritualistic visions, the astral-feminine concept and shamanic vision of The Silver Machine was made clear to Her. She was on course to discover the central tension that drives mystic creation and mimic it. Thus the primal axiom for the cult of Silver Machine was born.

The epoch of The Silver Machine began in 2012, from mystic visions seen by its female founders in Savannah, GA. The name of this cult of performers, and their mytho-futurist-intergalactic-shamanic doctrine, sound and aesthetic, are all derived from the infamous psychedelic-space rock band Hawkwind. Although Hawkwind were the original voyagers exploring this dimension of cosmic mythology, they were a harbinger of deeper insight. The Silver Machine travels sideways through time, along Hawkwind’s electric lines, calling forth ancient truths long forgotten, discovering new Zodiac signs. The heroines in this space odyssey reach even further, discovering new quantum territory with every enchanting harmony and guitar chord.

When listening to Standing On The Bare Ground, you are projected to an alternate realm. The all-female crooning sounds like the conjuring of spirits at a druidical fertility ritual. The synths tingle and amplify your senses, activating long-forgotten synapses of the mind, forcibly wrenching open the third eye of our collective consciousness. And the drums, forever charting their cosmic trajectory, carry the momentum, moving into the future and claiming it as the present, perpetually seeking the event horizon.