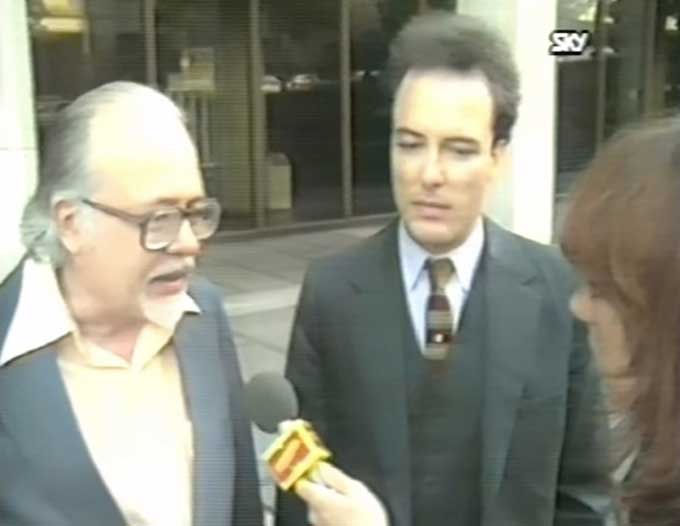 While going through our old website files we recently turned up this article from 1987 by Bob Sipchen, that we believe originally was printed in the Los Angeles Times newspaper. We found it particular interesting, and thought you all might enjoy it as well.  The photo above shows Jello Biafra and his father, Stanley Boucher giving the interviews that are mentioned in the article.

A soft-spoken mental health professional from Boulder, Colorado, Stanley Boucher still smiles slightly when he refers to the young man he named Eric Boucher 29 years ago as “Jello Biafra”

But as he stood in the hallway of a Los Angeles Municipal Court building, waiting for a jury to decide whether his son was guilty of distributing harmful material to minors, Boucher said he admired what the boy he reared on Kennedy liberalism has done with his life since becoming a lead singer for the punk band Dead Kennedys.

The jury, as it turned out, couldn’t decide whether “Penis Landscape,” a poster included in the Dead Kennedys’ 1985 Frankenchrist album was obscene, and when a deputy city attorney tried to refile the misdemeanor charges, the judge in the nationally publicized case turned him down.

Outside the courtroom, Stan Boucher smiled and said he was relieved.

“I’m so happy I want to tear down buildings! I want to vandalize! I want to spray paint!” Biafra announced, looking almost “L.A. Law”-ish in a pin-stripe suit he had picked up at the Salvation Army. After autographing albums for some of the jurors, the self-proclaimed cultural terrorist noticed that the small swarm of reporters and legal types were disappearing into elevators.

“No one wants to go out and talk some more?” he asked.

“Your 15 minutes of fame are over,” someone called out.

But that doesn’t seem likely.

The case killed Biafra’s band and left the man who wrote the lyrics to such anthems as “Religious Vomit” and “Kill the Poor” nearly broke, but an angry young man is something of a novelty in the 1980s, which may explain why Biafra’s “spoken word” performances — in which he discusses such topics as “Why I’m Glad the Space Shuttle Blew Up” — are drawing crowds of folks who wouldn’t have been caught dead at a Dead Kennedys concert.

A couple weeks after the trial, in San Francisco, Biafra was running a little late, hustling about in a last-ditch effort to avoid eviction from his apartment in the increasingly gentrified Mission District.

The walls are a montage of clutter. One displays the jackets of albums the label has produced by bands such as the Jungle Studs, Part Time Christians, Tragic Mulatto, and others that have gone beyond the Dead Kennedys’ dubious taste in selecting names.

A bulletin board above an old couch sports a well-punctured portrait of Oliver North. A collection of irate letters are stapled to a door. For example:

“Your music…has corrupted the lives of certain youths in the community. Several of these children were honest churchgoers and played an active role in parish activities. They now belong to a ‘band’ called Social Insects and are nothing but a disturbance.”

To Biafra, of course, a disturbance is a fine thing to be—a calling, even

“That sounds like him,” one of the Alternative Tentacles staff people said, hearing the sputtering of a vehicle that had clearly been driven hard. Out in the garage Biafra picked at the remaining pieces of his truck’s turn signal, which he had somehow just shattered.

At the courthouse, Biafra’s face has been so taut with anger or stress it looked as if he’s had a premature face lift. Two weeks later, it still did. But then Biafra still has a lot to be upset about.

For one thing, he was getting evicted (the reasons were complex, but apparently has nothing to do with his song “Let’s Lynch the Landlord”). What enrages him the most, though, is how few people are enraged by all the enraging things in the world. For instance, he is infuriated by the what he sees as the aggressive attempts by some law makers and enforcers around the country to curtail the free expression of artists in various media.

As Biafra sees things, mainstream record companies have been cowed by the forces of repression for so long that they now push “Glam rock” and other heavy metal variants, believing that “if people want loud music as a cathartic ritual to let off anger and steam, why not give them something that will go nowhere, something sexist and meaningless that preaches obedience to authority rather than taking action on your own?”

As a singer, Biafra has the same sort of impassioned sensibility and tremolo that Joan Baez might have as she’s being electrocuted.

The Dead Kennedys’ music helped blow away the sex-, drug-, and disco-addled culture of the ’70s, Biafra believes. But he also believes that today’s yuppie careerist consumerism and the self-centered spiritualism of the New Age movement are equally fertile ground for the insidious forces that would eradicate individual expression and freedom.

“New Age music is the essence of fascism — it’s a sedative form of so-called art meant to sedate listeners and make them as mellow and unresponsive as possible,” he said. “When people get this self-centered, and so into building their own cocoons and hiding there and shutting out the outside world, that’s when it’s ripe for [Oliver North’s] secret team and the Reganoids to start bringing in actual corporate fascism in this country.”

Biafra is so vehement in his critique of the “Me Generation” and subsequent indulgence of the ’80s that a Village Voice rock critic, called by the defense at the obscenity trial, testified that the Dead Kennedys were “puritanical…suspicious of pleasure.”

That remark, too, makes Biafra mad. Dead Kennedys were “suspicious of the Disney school of fun, which is used as an instrument of mind control by corporate media…,” he said.

Although more than few punks apparently missed the satire in such tunes as “Kill the Poor” — leading Biafra to write a song called “Nazi Punks Fuck Off,” — critics have tended to belittle the “lead pipe” irony in the band’s anti-authoritarian message

“Subtlety is boring. When people are asleep, it’s necessary to become an alarm clock,“ said Biafra, who will be taking the sort of commentary that appears on his soon-to-be-released, No More Cocoons album to colleges across the country this fall (including Pomona College in Claremont and UCLA).

“It’s really amazing for Biafra to be taking the [lance] against the great [?] of authoritarianism in America,” said Allen Ginsberg who, along with such ’50s and ’60s icons as William S. Burroughs  and  John Giorno,  recently joined Biafra at a spoken word festival  in Lawrence, Kansas. “That’s really a heroic thing for a rock-’n’-roll generational hero to specialize in because that will educate the younger people in the audience who are in the potential intellectual phalanx.”

Pointing out that his own anti-materialist poem  Howl caused the same sort of “censorship” problems that Biafra faced, Ginsberg says he sees Biafra’s punk poeticizing as part of a movement “that continues, generation to generation, [to pit] individualism against the mass conformism that can take violent and repressive form

“I’ve always thought, as with Dylan and John Lennon, that real rock ’n’ roll has the classic poetic function of educating the audience, elevating the audience and inspiring the audience…” he said. And Ginsberg is so impressed with what Biafra has to say that he extends to him what may be the ultimate Beat [and Buddhist] accolade by calling him “the bodhisativa of the punk generation.”

“I think his basic impulse is an extremely generous one, and a bodhisativic one, which is to spread information, to relieve suffering, and to teach.”

With uncharacteristic understatement, Biafra prefers to put his message like this: