Jello Biafra and The Melvins Label News The Bat-Chives

THE BAT-CHIVES: JELLO ON JELLO BIAFRA AND THE MELVINS (2004) 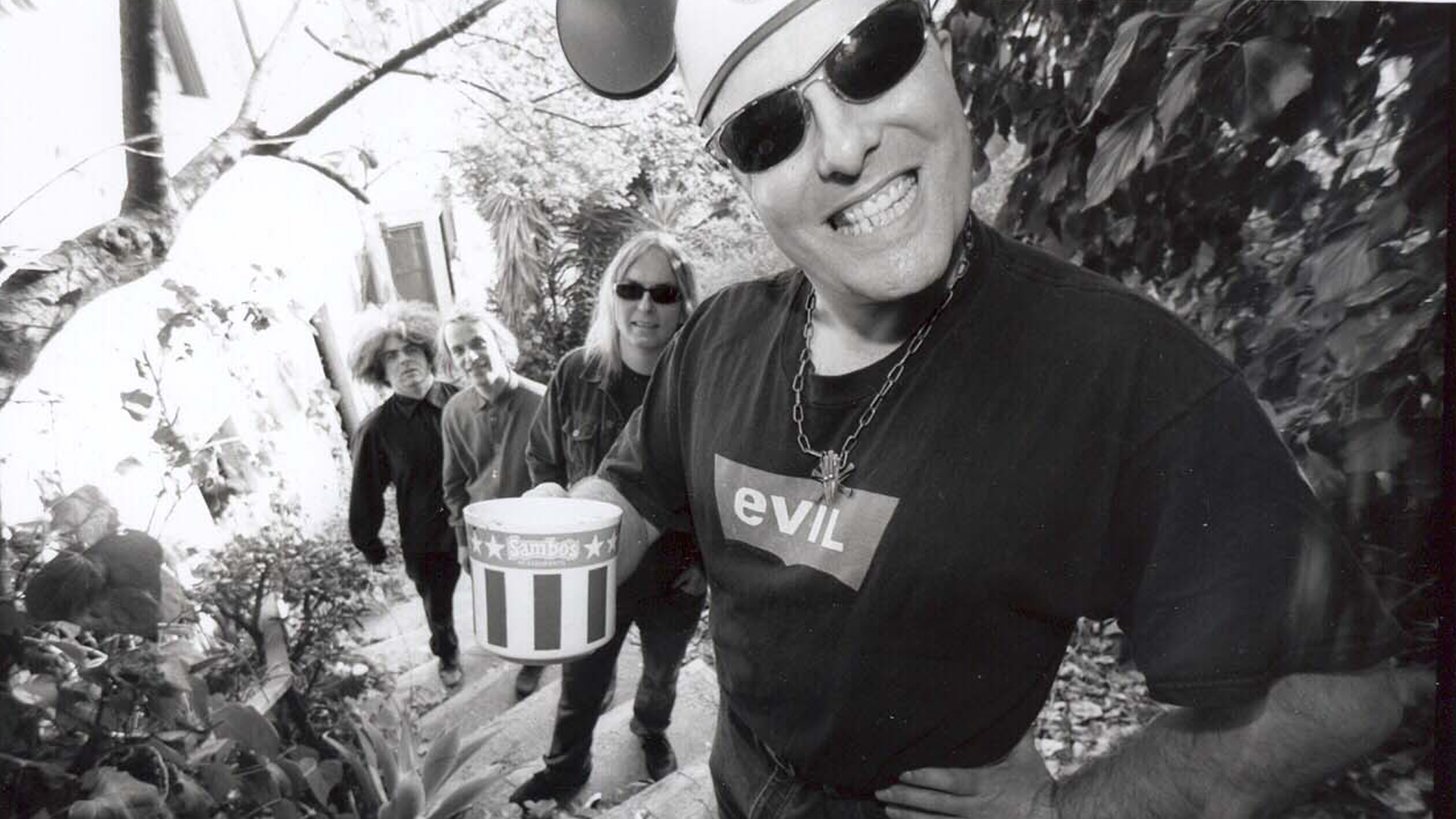 In October 2004, Alternative Tentacles released Never Breathe What You Can’t See (Virus 300), a collaboration between Jello Biafra and the Melvins. Jello sat down to answer a few basic questions about the record and about working with the reigning kings of sludge. This Q&A was conducted in Fall 2004. Since then, Jello Biafra with the Melvins have released a follow-up album, Sieg Howdy! (Virus 350) in September 2005.

Q: How did you initially get involved with the Melvins?

BIAFRA: Well, they first approached me about doing a tour of all Dead Kennedys songs because they were so outraged about the fake reunion scam-shows with the other ex-band members, and their conduct in general, the way they were trashing Dead Kennedys, and I told them that I had a lot of new stuff written and I’d rather do new songs, so the plot began to thicken from there.

Q: Had you known them long at this point?

BIAFRA: Not all that long, it’s weird, a demo of theirs fell into my hands clear back in 1984, but I didn’t really get to know them in San Francisco, and didn’t really get into their band until much later. There were several times I saw them and I wondered ‘why do people like this band so much?’ but at one point it just hit me- maybe it was when they covered “Halo of Flies” by Alice Cooper and did such a good job of it, then I was dialed in. We actually recorded “Halo…” [because] they never put it on their own albums, but we didn’t have room for it on this one, so it’s going to come out some time next year. It’s either gonna be a long EP or another album, depending on whether Mr. Jourgensen [of Ministry/Lard] and Adam Jones (Tool) follow through on their re-mix ideas. Adam actually played guitar on half the album, (“Islamic Bomb”, “Caped Crusader”, “Enchanted Thoughtfist”, and “Dawn of the Locusts” which were recorded in L.A.)”

Q: What was the musical approach for the album? Or what you were trying to put across sonically?

BIAFRA: Well I never plan that kind of thing in advance, we got together to rehearse and start feeling each other out, and I showed them different kinds of songs of mine and they liked some better than others. The weird part, though, was that Buzz walked in with punky riffs for me, while I wrote really heavy shit for them. But we both have so many tour commitments and schedule conflicts that it took awhile before we actually made it into the studio and finished the album. We worked on it in dribs and drabs.

Q: Take a moment to elucidate the lyrics song by song.

BIAFRA: “Plethysmograph”—“Plethysmograph,” weirdly enough was written for Lard, but I wasn’t sure that there was going to be any more Lard, so I brought it in for this project. It’s about, what I would call, a torture device, that’s been used in Arizona prisons, maybe others. Basically it’s a lie-detector cock-ring they put around the vital organs of sex-offenders and show them pornographic pictures and if the ring detects stewart getting larger, then parole is denied. Ashcroft tries it on in the third verse and electrocutes himself. I know…wishful thinking…

“McGruff the Crime Dog”—It’s kind of explained in the lyrics, but basically with all of our homeland security- and I’d thought of this for years- why not just eliminate unemployment by hiring half the country to spy on the other half? And all the spies can dress in identical McGruff the Crime Dog costumes and masks and follow people everywhere, even into the bedroom. The Melvins thought that using McGruff was a bit out of date, and then lo-and-behold he came back on the air again. There’s a new set of what looks like computer generated McGruff commercials, where he bears an uncanny resemblance to Snoop Dogg. It’s aimed at younger kids this time- you know ‘when you grow older, be sure to turn in your friends and parents for drugs’ and things like that.

“Yuppie Cadillac”—It’s just my way of burning SUVs and their owners alive. It’s not just that they waste so much gas, we’re trying to colonize the Middle East, it’s that they seem to bring out the inner Schwarzenegger in almost everybody who drives one. It’s as though they’re even marketed to people who wanna pay top dollar just to make a statement on the road saying, “I’m an asshole! Whadya gonna do about it?” Far as I’m concerned, there should be a law that no one can own one of those oil hogs unless they can prove they actually need it. Better yet, how about this for a new law: All SUV owners are automatically in the military reserve- make ‘em get their own goddamn oil!

“Islamic Bomb”—Sometimes I wonder if I should keep writing these ‘worst case scenario’ songs, because they keep coming true. And now “Islamic Bomb” is already coming true. If you look at all the nuclear technology leaking out the back door from Pakistan, they got busted, selling those do-it-yourself, gift wrapped nuclear bomb making kits to Libya and North Korea and Iran for 60 million bucks a piece. Then that begs the question ‘where’s the money now?’ I don’t think Dr. Khan has it. Where did it go? Why is Pakistan so desperate for it in the first place? The answer is the same as why there are so many nutty fundamentalist religious schools called the Madrassas cranking out all these jihadi warriors in Pakistan. Their public school system is largely shut down. Why? They don’t have any money! Almost half their yearly budget goes to paying back the World Bank and the International Monetary Fund. You know if the World Bank and the IMF would be a little less cruel to third world countries and forgive the debt so these countries could feed and take care of their own people, we might have a lot less terrorists.

“The Lighter Side of Global Terrorism”—Another sort of method acting inspired song. I touched on this in a Lard song before and expanded it for all those TSA people we have at airports now. When I played a customs man in the Highway 61 movie, it occurred to me ‘Wow, this is the perfect perv job’. You get to paw through everybody’s stuff, and paw them, too. You can peep, you can tom, you can go back to the office and get it on! Then, when people started patting me down and groping me just about everywhere at airports because I was on somebody’s shit list, I realized, ‘Whoa, this is an even more of a perv job’. A lot of the TSA people snarlin’ at you are ex-cons, the government haven’t even checked out a lot of their backgrounds yet. Mykel Board wanted to put out a comp years ago called “The Lighter Side of World Hunger”. It’s a title like “Kill the Poor” or some of my others, that’s guaranteed to draw you in, by touching a raw nerve. Then you learn something (hopefully, anyway!).

“Caped Crusader”—That’s another one I guess I owe to my method-acting background, way back when. Instead of describing something and pointing fingers, I tried to write from inside the mindset of a suicide bomber, something our homeland security people have not spent anywhere near enough time looking into. I stole some words for this song, from Mohammed Atta and John Ashcroft. Spot the difference! When I saw some of their statements and compared them and I couldn’t believe how similar they were. The mentality is the same. I think that religious fundamentalism should be classified as a mental illness, right alongside obsession with law enforcement.

Q: I guess my take on “Enchanted…” is that you should take everything with a grain of salt, and make up your own mind. Just because what I’m telling you is something different than what everyone else is saying, don’t just accept that either. Make sure that you think about it too.

BIAFRA: You can have that as your own take on the song, that’s fair enough. But I also like whacking people over the head with what I think they should know and what my view of it is.

Q: I thought that it was kind of admirable, I liked that one.

Q: Did the Melvins have any input or concerns as far as the lyrics? Were their political beliefs essentially the same as yours, or was it even really an issue?

BIAFRA: They gave me free rein with the lyrics, we’re not 100% in sync politically, I mean neither were the Dead Kennedys. Four different people are going to have four different angles on things.

Q: Do you see the lyrics and concepts that you use in an “album-by-album” context or does it all bleed together?

BIAFRA: All my lyrics, songs and spoken word and songs are one continuous body of work. You’ll find threads of my angle on the world in everything. Regardless of whether we wind up in camps if Bush gets re-elected, I ain’t goin’ quietly. I’ve been a bad boy for so long that it’s too late for a religious conversion to get on their good side, so I might as well keep causing as much trouble as I can.

Sounds starts quiet and gets really good at 1:18