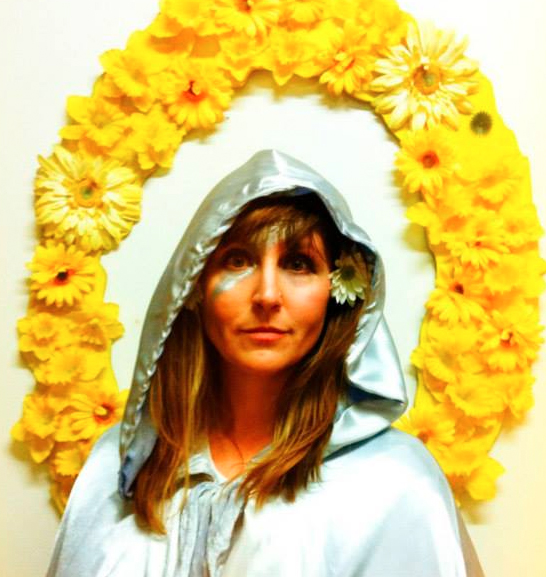 The epoch of Silver Machine began in 2012, from mystic visions seen by its female founders in Savannah, GA. The heroines in this space odyssey reach even further, discovering new quantum territory with every enchanting harmony and guitar chord. In this particular juncture of space and time, we trace Silver Machine’s cosmic beginnings and their brand new LP, Standing On The Bare Ground with the groups’ High Preistess, Tracy Cox.

Corey: Would you quickly explain how Silver Machine came to be?

Tracy: It truly came to me in a flash.  I guess it had been simmering for a while but I wasn’t aware of it.  One Sunday morning after a couple of cups of coffee it was all there—the name, the look, the way we’d set up the stage, and the first song which I had actually dreamed.  I imagined it centering around Robyn the drummer and I knew her greatest passion in the world was to play the drums, so it was just a matter of enlisting a few other participants.  The very next day, Robyn, Danielle, Sheila, Laura and I were meeting for our first practice.

Corey: Was it difficult writing the songs for Standing On The Bare Ground or was it seamless?

Tracy: It was pretty seamless.  Once the band concept was there, everything seemed to flow.

“After a little while of being in The Silver Machine, I realized I had created another cult, so I decided to just go with it this time.”

Corey: What is your creative process?

Tracy: For me, the original idea is key, and then everything else (including the music) builds around that.  I think that worked well with this band because all of the band members are artists.  We really got into the visual and performative aspect of our shows, so it was pretty natural to write music to convey the feeling we wanted the shows (we called them ceremonies) to convey.

Corey: “The Silver Machine is a cult.” Is there a specific meaning behind that or is its interpretation left to the listener?

Tracy: No specific meaning, really.  Years ago I was in a cult-like band called The Causey Way and we had stickers/t-shirts that read “The Causey Way is not a cult.”  After a little while of being in The Silver Machine, I realized I had created another cult, so I decided to just go with it this time.

Corey: How did you link up with Jello?

Tracy: I knew Jello because Alternative Tentacles released records for two earlier bands I was in, The Causey Way and Pilot Scott Tracy.  So I knew he was cult-friendly and thought he might be interested in this new manifestation, The Silver Machine.  I think I remember knowing that he liked Hawkwind, too.   I feel a forever bond with Jello because we shared a friendship with another AT artist, the late, great Wesley Willis.  In fact, Jello introduced Scott (my husband, who was the front man of The Causey Way) and me to Wesley.  There’s a small but devoted group of people who understood Wesley and cared deeply for him, and I’ll always cherish those people.

Corey: Back when you were doing them, what were your performances like?

Tracy: We tried to think of them as ceremonies rather than shows, so we usually performed in odd venues, for free… more of a strange happening that you might stumble upon than a rock show that you’d see in a club.  But of course it was a show, and way more work than the usual show– there were lights, candles, silver things, flowers, bubbles, video, and props including a massive wooden circle backdrop that Robyn would have someone haul around town… we spent a lot of time on our display.  Magic needs its setting.

Tracy: I still have the moog and organ set up and ready to roll but they are in fact accumulating some dust at the moment.

“But our inspiration came more from the aura of their dancer, Miss Stacia.  I always saw something profound and beautiful in her image—an incredible combination of badass-ery and vulnerability.  I like to imagine our music as her soundtrack.”

Corey: How do you think The Silver Machine’s sound relates to the psych/space rock sound of the mid/late 70’s?

Tracy: I think there’s a kinship of feeling, but I don’t think we sound like them.  I think our sound is gentler– more yin, less yang.  I have the usual nostalgia for that era and that sound… and Hawkwind is obviously amazing.  But our inspiration came more from the aura of their dancer, Miss Stacia.  I always saw something profound and beautiful in her image—an incredible combination of badass-ery and vulnerability.  I like to imagine our music as her soundtrack.

Tracy: I was born in the 1970s in the Florida styx so the first music I knew (like so many others in my demographic) was 1970s pop on 8-track tapes… The Carpenters, Simon and Garfunkel, etc. (I’m imagining Jello grumbling).  My childhood friends and I got big into disco and regularly turned our living rooms into dance floors (I’m imagining Jello groaning).  Then there was Duran Duran (Jello just fired me.).  But by the time I was in my later teens, I discovered the magical world of punk rock clubs and indie bands.  My secret criterion for judging where to go for college was, “are there band flyers?”  So I went to college in Pensacola where there were band flyers and in fact the first night there, a flyer led me to see The Flaming Lips… in 1988!

Tracy: Maybe it’s because of my background in film, but I can’t really separate sound from image—for me they have to go together.  So I’m inspired by music that works that connection in an interesting way.

Tracy: I have to be both cliché and a braggart and say The Ramones in 1988.  I guess it was past their heyday, but good lord, not really.  The spectacle, the sound, the general feeling… it was incredible.

Tracy: I think it was Shaun Cassidy.  But I was 7 years old, so perhaps you can forgive me.

Check out THE SILVER MACHINE at their artist page for more info. For even more take a look at their facebook!

Standing On The Bare Ground is in stores now on Alternative Tentacles Records, and is available at your favorite record store and streaming service or you can buy it now HERE.