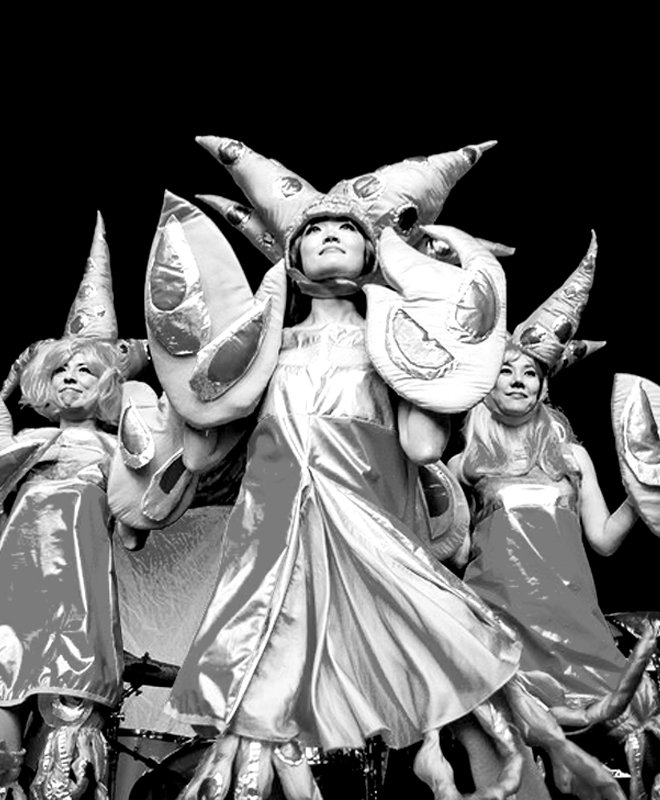 WEB STORE EXCLUSIVE!
Returning once more from their home world of Planet KeroKero (via Tokyo) EX-GIRL has returned to earth to astound us with their noise rock, space punk masterpieces. Reminiscent of Japanese avant-noise band’s like Melt-Banana, Boredoms, OOIOO, and Ruins, EX-GIRL spawns unpredictable, genre-twisting gems that range from sludgy pop to a capella calisthenics to soaring prog rumination. EX-GIRL can easily be ranked along side musical innovators such as Diamanda Galas, Zappa, B-52’s, Nina Hagen, Devo, Talking Heads and Laurie Anderson. The music as well as the live shows conjure up these comparisons. On stage the band incorporate performance-art aesthetics with wild costumes and intense energy. Donning enormous rubber wigs, frog-head masks and custom designed flower-power dresses, the band is instantly captivating. The searing vocal harmonies and quirky choral chants combined with the unusual music they play truly gives the audience the feeling they are observing something quite other worldly. And as far as the band is concerned, they are!

When EX-GIRL formed in late 1997 none of the band members had any previous musical experience. Despite their inexperience the band began playing out regularly. They soon released their first album, “Heppoco Pou”, which was produced by Hoppy Kamiyama (touted as the Japanese Eno) in June 1998 on a Japanese indie label. The album was instantly embraced by San Francisco college radio station KUSF where it went into heavy rotation. Tours across the world and internationally released records ensued, up to and including the incredible “Endangered Species” from 2004 that came out on Alternative Tentacles! The band has also released albums on Mike Patton’s Ipecac Records and had limited edition reissues of their Japanese only albums on Secret Records last year.

These two new tracks, “The Crown of Dr. Keroninstein” and “Senor Ginger” come hot off the band’s return to the stage in Tokyo and at Austin, TX’s SXSW!

Limited to 250 on purple vinyl, this online store only exclusive and will only be available through our web store or from the band themselves.