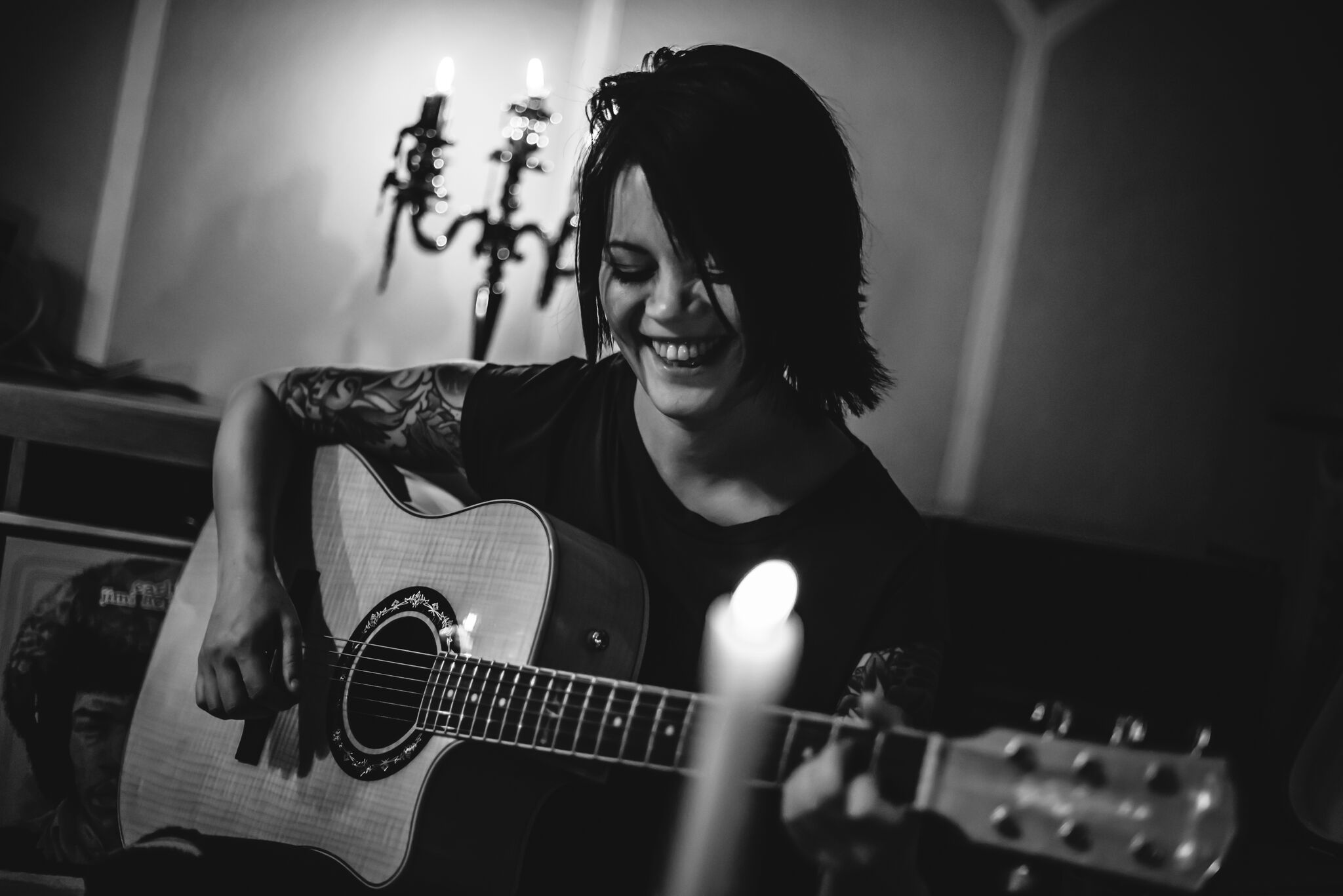 If Elvira and Wednesday Adams consumed the flesh of man, drank shots of snake venom, started a garage rock band, and played the bride of Frankenstein’s bachelorette party, it would probably sound exactly like THE DARTS. We sat down with guitarist Meliza Jackson to get the scoop on THE DARTS new album I Like You But Not Like That, and to get a little glimpse into the life of one of our favorite rock n’ rollers.

Corey: The Darts are a relatively new project for you. What did you do before you met the gang?

Meliza: Before I met the girls I’d been playing mostly with the band decker., from Sedona, AZ, and Rose Colored Eyes, from PHX, AZ. But, I’ve been playing in bands since my early teens. Everything from punk, to classic rock covers, rock/alternative, top 40, even Joan Jett and Social Distortion cover bands. I’ve definitely kept busy over the last 15 years playing music.

Corey: How did you meet the girls?

Meliza: I met the girls through the local music scene. I was a fan of Nicole and Christina’s previous band, The Love Me Nots, and would try to catch shows as much as I could. I was stoked to see them start an all girl band, and caught some early DARTS shows in PHX. As it turned out later down the road, they were looking for another guitarist and Nicole reached out. It was such a great fit from the start, and I’m stoked to be a part of the band.

Corey: The timeline in which you joined the band was a pretty gnarly crash course, what was it like not being in The Darts, and then 6 weeks later being on tour with The Damned?

Meliza: Surreal. Hahaha. I’m a big fan of The Damned. I remember Nicole telling me shortly after I joined the band that they had asked THE DARTS﻿ to go on tour, and I don’t think that actually sunk in until I was on a plane to Boston to play the first date. It was an experience I will never forget. I still have my laminate hanging in my bedroom. Haha!

Corey: How’ve the fans been treating you? Any surprising encounters?

Meliza: The fans have been amazing. I’ve felt a lot of love and support from my friends and loved ones at local (PHX) shows, as well as all of the tour dates we’ve played together so far. I can’t wait to see what 2019 brings.

Corey: Working on this upcoming album was the first time you’ve been in the studio with The Darts. How did it feel? Was it seamless? Were there challenges?

Meliza: Overall I think my first studio session with THE DARTS﻿ went really well. I spent a lot of time on my own experimenting with tones and sounds, trying to create something a little more psychedelic, but still staying within the garage rock sound. Bob Hoag and I spent a lot of time together picking the right guitar for each song, the right pedals, and the right tones. Most songs I actually tracked multiple parts on several different guitars. We even used a Bass 6 on a few tracks that sounds incredible. I can’t wait to share them all. I think the only challenges were bob and I going back and forth on what guitar sounded better for what song. Overall, I had a blast making the record, and I think that comes across when you listen to the tracks.

Corey: From a character standpoint, what rolls do you find yourself playing most often within the band?

Meliza: Rikki always tells me I’m the glue that holds us all together. Haha. I think I’m pretty laid back and easy going. I usually just try my best to bring something positive into the mix. At the end of the day, I hope whatever I add is a new creative standpoint and just positive energy.

Corey: This year has thankfully brought a spotlight down on the lack of equality, and the treatment of women in our country. Would you please educate us as to what it’s like being a woman in an overwhelmingly male driven music industry?

Meliza:I think it’s much harder as a female in the music industry. Being a female musician, you almost automatically get judged, and some people still may assume that you can’t play your instrument as well a guy would. I also think people tend to categorize girl bands as just being a gimmick, and don’t get taken seriously. I love seeing more and more women in bands kicking ass and killing it at their instruments. I think it’s going to pave the way for more equality in the near future.

Meliza: What a tough question! I’ve been to so many shows. I actually get to see The Rolling Stones for the first time ever this May in Phoenix, so, I have a feeling that will make the top spot in my concert list.

Meliza: I think my parents were a huge influence on my musical taste. I actually played piano before picking up the guitar, so when I made the switch, my dad was a big part of supporting me to play, and helping me discover bands. I remember teaching myself to play guitar to bands like CCR, Buddy Holly & The Crickets, Chuck Berry, Johnny Cash, Led Zeppelin, lots of old classic rock/blues/country. My mom on the other hand loved Motown and disco, so I also have a soft spot in my heart for classic Motown. Once I hit my teens, I ventured out onto my own musical taste and fell in love with punk. My first few high school bands were punk rock. It’s definitely a huge part of what shaped my initial guitar playing.

Meliza: As far a guitar, Jimi Hendrix is my go to for inspiration. Nobody played like him. I don’t think anyone ever will. He made the guitar such an iconic instrument by the way he played, and it literally blows my mind every time I put one of his records on. Keith Richards and Jimmy Page were also huge influences on me for guitar.

Corey: What are some items you always take on tour with you that are absolute necessities?

Meliza: Hair products! What else… I’d have to say after being on the road a few times with my other band decker., I’ve learned it doesn’t hurt to have a few essential oils on hand to calm the mind and help your mood. An extra phone charger or external battery pack. Headphones, a pillow, and lots of extra guitar picks.

Corey: You come from more of a desert/psych rock background. What’s it like playing more punk/garage centric stuff?

Meliza: It’s been a blast. One of the very first original bands I joined in Phoenix, The Dead Eyes of London, were heavy garage rock, and it was super high energy on stage. I’ve missed it ever since that band broke up. It’s really great to get back into it.

Corey: If we listened to your Recently Played list right now what would we learn about you?

Meliza: You’d learn that my musical taste ranges from everything from The Stooges, Queen, Charles Bradley, The Cramps,  Muddy Waters & Amy Winehouse. I listen to something based on how I am feeling and what captures the right mood.

Corey: If you could collaborate with any other living musician right now who would it be?

Meliza: Brittany Howard from Alabama Shakes. She’s such a powerhouse on guitar and her vocals give me chills. It would be absolutely rad to collaborate with her.

Meliza: Usually it’s as simple as a good guitar riff that I can build on, a strong melody, or a catchy drum beat. Songs evolve easy from those few things alone.

Corey: Would you share an insane or unbelievable tour story?

Meliza: Most recently, we got the chance to open for Joan Jett at the Price Is Right season finale wrap party, hosted by Drew Carey. Because of my work schedule, we weren’t sure if I would be able to make it on time or not. As it would happen, my plane from PHX to LA got delayed a bit, and I barely made it to LAX on time. Rikki’s husband Dusty picked me up from the airport and rushed me to the show. We had our stylist Kelly waiting at the front door of the venue, and as soon as Dusty dropped me off, I ran to find her, guitar in hand, and we booked it to the bathroom so I could get my makeup on and get dressed. I was literally counting minutes until we had to go on stage at this point, and somehow we made it happen. I met Joan backstage after our performance, and that was surreal. I’ve looked up to her as a female musician who plays guitar for so long. She shook my hand and asked, “you the guitarist from the The Darts?” I think I mumbled something like yes, and she said she thought I was good. Surreal! I think at that moment I realized, never giving up on your dreams pays off.

Corey: What is your absolute fucking jam that you’re listening to right now?

Meliza: Kill em all. Wait, isn’t that a Metallica song?

Corey: What do you want us to know about the upcoming DARTS album?

Meliza: I’m really proud to be on this record because for me, it’s the first full album I’ve done all the guitars on. I’ve been fortunate enough to record on many different projects with different bands here and there in Arizona, but this will be the first time I can say that all the tracking was my own. I’m also incredibly happy with the tones and sounds Bob (Hoag) and I were able to get. I can’t wait for the release!

Check out THE DARTS at their artist page for more info and upcoming tour dates. For even more take a look at their website!

I Like You But Not Like That comes out Friday, May 24, 2019 on Alternative Tentacles Records, and is available for pre-order here! There are also limited edition pre-order bundles available while supplies last!

2 comments on "INTERVIEW WITH THE DARTS’ GUITARIST MELIZA JACKSON"