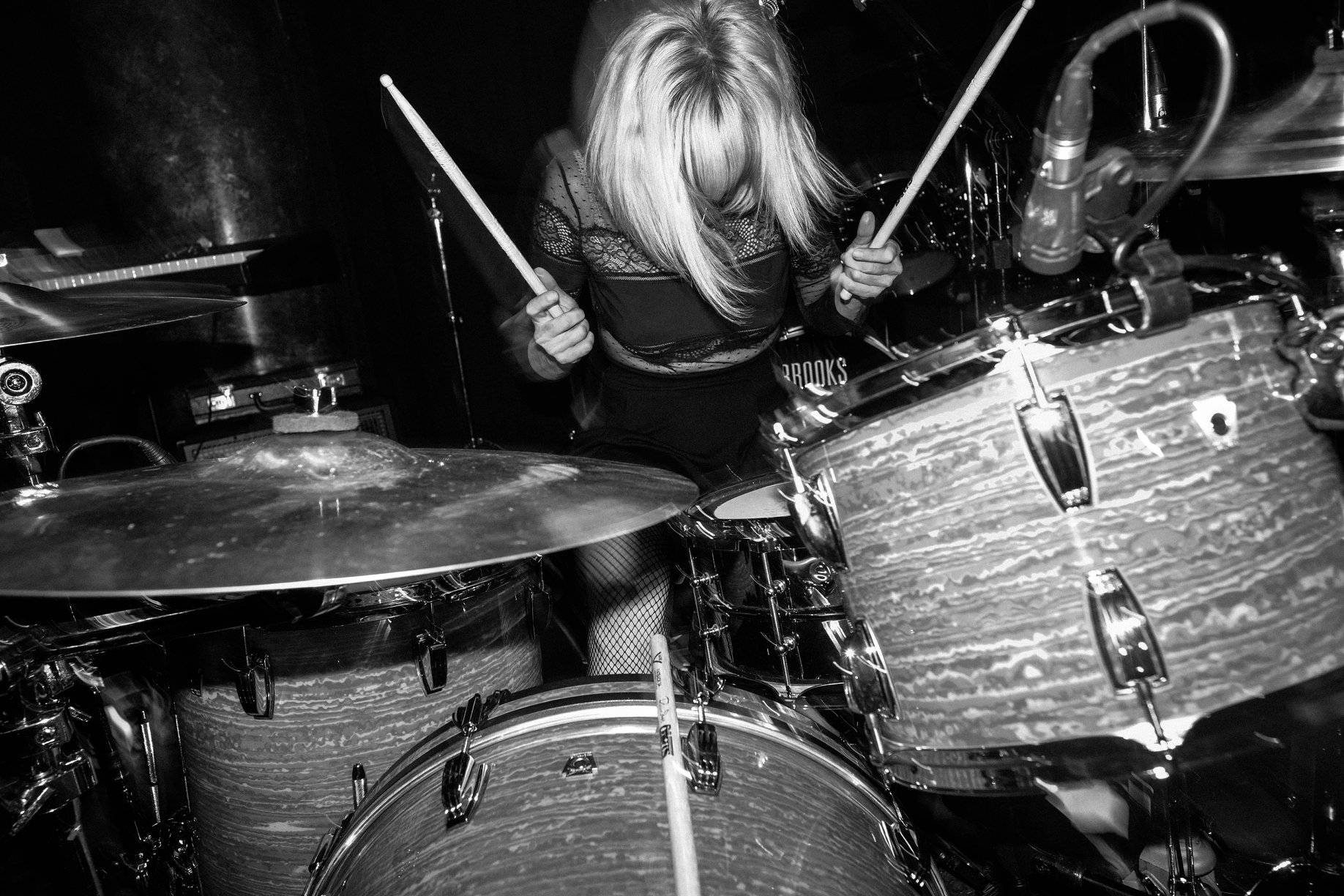 If Elvira and Wednesday Adams consumed the flesh of man, drank shots of snake venom, started a garage rock band, and played the bride of Frankenstein’s bachelorette party, it would probably sound exactly like THE DARTS. We sat down with drummer Rikki Styxx to get the scoop on THE DARTS new album I Like You But Not Like That, and to get a little glimpse into the life of one of our favorite rock n’ rollers.

Corey: Hey Rikki Styxx, where did you get your cool punk stage name from?

Rikki: I actually started playing drums right out of high school and started hanging out in the gutters with a bunch a punk bands in Denver CO when I moved out of my parents house.  My friend, Robdog, from a killer skate rock band called Frontside Five gave me the name even before I considered myself a real drummer.

Corey: Do you consider yourself a drummer or performer first?

Rikki: If you would have asked me this 5 years ago, I would have said performer first definitely.  But after leaving a very lucrative career and risking everything to play drums, I will say that I am a drummer first and foremost.  If I get to perform in front of an audience then great, but remove that, and I will still play drums for the rest of my life.

Corey: The Darts are a relatively new project for you. What did you do before you met the gang?

Rikki: Basically trying to survive as a musician, which means playing with anyone and everyone.  I toured with pop punk band The Dollyrots, went into the studio with punk originator Alice Bag,  and also continued touring and recording with The Two Tens.

Corey: Your fans may not know this, but you live in LA. The Darts live in PHX. How does that work out for practice and recording?

Rikki: Very well actually because who really likes rehearsing anyway?  I get to record my drum tracks in Los Angeles at Kitten Robot Studios and I send my tracks to the girls and it comes back a masterpiece.  I honestly would never want to change the way we record now because it allows me to really focus on what I want out of the drums.

Corey: From a character standpoint, what rolls do you find yourself playing most often in The Darts?

Rikki: I have a background in injury and treatment and consider myself a healer, so if anyone gets hurt, its up to me to fix them up and get them back on stage.

Corey: If you’re allowed to disclose it, what is one of your favorite inside or long running jokes in the band?

Rikki: This band has been known to be a little reckless, so we have a motto “SLOWER IS CHEAPER”.  And we say that a lot.

Corey: Withholding commentary on whether either of us think you have or not, what are some moments where you stepped back and went, “Whoa, have we finally arrived?”

Rikki: We arrived when….. We backed Jello Biafra on Halloween night opening for The Damned on their US tour and played Sjock Fest in Belgium last summer.

Corey: I heard you just got sponsored. Congratulations! How did that happen? Do you view this as a huge milestone for yourself?

Rikki: This is honestly the biggest thing to happen to me as a drummer.  I’ve been playing Ludwig for 10 years and promoting them online.  I finally caught their attention and signed with them recently.

Corey: You wrote “Bullet” for the 7” you put out with AT. Do you write a lot of the Darts material?Anything on the new album?

Rikki: I sent Nicole a lot of drum tracks that inspired songs for the next album.  When I write, I sing melodies into my Iphone voice messenger and send it to Nicole and then they get turned into full songs (because of her).  It’s the most brilliant way to write songs as a drummer.

Corey: Do you think being a drummer directs you towards a different approach in song writing than the approach of a vocalist or guitarist?

Rikki: Well yeah, I get to come up with hipper drum parts for songs, unlike when I’m sent a basic demo track.  I get to leave room for drums to shine.

Corey: Would you share an insane or unbelievable tour story?

Rikki: The Damned invited The Darts on stage to sing “Neat, Neat, Neat”.

Corey: If you could be any fantasy creature or being, who/what would you be?

Corey: What is your absolute fucking jam that you’re listening to right now?

Rikki: My mom was a jazzercise teacher and was always working on routines.  So I grew up listening to a lot of 80s pop music.  Like Madonna, Janet Jackson, Prince.

Rikki: All the musicians we share the stage with.  There’s nothing like standing right in front of talented musicians and taking it all in.

Rikki: King Khan and the Shrines.  Nothing better than girls in the pit.  It was a total dance off.

Corey: What’s something you wish your fans knew about you?

Rikki: Operation Ivy which is weird because I’m not even a huge ska fan, but I am a HUGGGEE punk rock fan.

Corey: What do you want us to know about the upcoming Darts album?

Rikki: It’s our best album yet.  I feel like I pushed my drumming and creativity to another level.  I’m ready for the world to hear it.

Check out THE DARTS at their artist page for more info and upcoming tour dates. For even more take a look at their website!

I Like You But Not Like That comes out Friday, May 24, 2019 on Alternative Tentacles Records, and is available for pre-order here! There are also limited edition pre-order bundles available while supplies last!