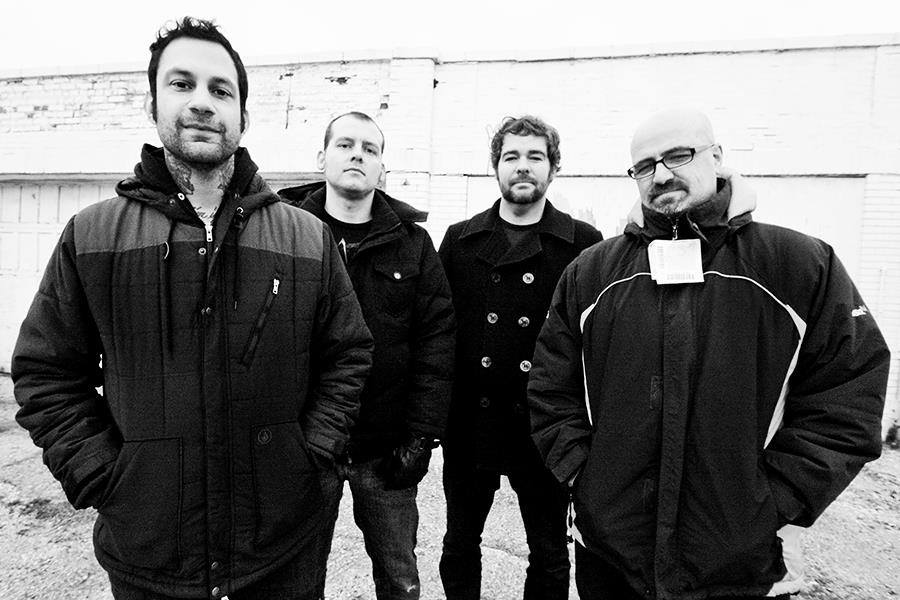 IMPORTANT NOTES FROM THE HARDCORE DIARIES

Corey: What sets Dead Ending apart from the other bands you have been in?

Jeff: I would say more than anything, is that Dead Ending is very much a sum of its parts. Like even though I’d say I write the majority of the music, the music would be completely different if it wasn’t the 4 of us playing it. Everyone has their own distinct style of playing and personalities that really make the music alive.

Corey: Legend has it that when you and Vic met you bonded pretty hard, pretty fast over super aggressive 80’s punk/hardcore stuff. Do you remember what that conversation was like? And who among those stated bands do you feel still has an impact on Dead Ending’s sound?

Jeff: I would say we bonded over drinking Sparks together more. Hahahaha! Serious though, Vic has so many amazing stories, I feel like I was picking his brain about shows he played more than anything. For me as a guitarist, I would say Dag Nasty is a huge one. Husker Du as well. Chain of Strength, Turning Point things like that too. When I wanted to start the band, I really wanted to make sure it was fast. I wasn’t hearing  anything fast HC anymore, everything felt so chuga chuga mosh, which is fine, but I grew up on fast HC, and I like the challenge playing guitar like that brings.

Corey: I’m really digging the art on the cover of this record. What was the inspiration behind that?

Jeff: Honestly, I’m not sure. Vic just emailed me the image and said this was it! I really loved the emotional reaction I felt just looking at the image, it was perfect for this record.

Corey: This 7” is Dead Ending’s first release since Shoot The Messenger. How do you think these new tracks reflect or depart from your last record?

Jeff: I’d say there’s a progression. I remember writing “What we believe,” really quick, and getting together with Derek, and it just clicking like first try playing it. “Painkiller,” really took on a life of its own. It was more of an idea than a song. I told Derek that I wanted to do something that had a big mid 90’s emo feel to it along the lines of Current, Kerosene 454, Side Show, Shotmaker, etc. That era of bands was such a time and place. I feel like it’s a lost style of playing. No bands sound like that anymore. So I kind of had the big riff written, and I knew I wanted to be fast as well, but have the sludge and feedback. So when Derek and I started playing it, it kind of just happened. I don’t think we’ve really played it the same way twice since it’s such a reaction and feeling. Like every Dead Ending record, everything was done in 1 or 2 takes, and finished that day. It’s all about the vibe, and what’s happening in that moment. I’ve approached the recording and mixing of our records in that mind set as well. Every EP was recorded and mixed in a day. The album was done in 3 days. Derek did the drums in 2 days, I recorded all the guitars for Shoot the Messenger in 11 hrs. I took no breaks, my finger felt like they were going to fall off. Hahaha! This 7″, the music was done in a day, but I had to send the tracks to Vic in Seattle, and he knocked it out in a night, and I mixed it the next day. When I got the vocal track for “Painkiller,” I was floored. His vocal performance gives me fucking goosebumps.

Corey: Dead Ending has played live very few times if I’m not mistaken. What’s up with that?

Jeff:  I think we’ve only played 8 shows. It’s more to do with scheduling since everyone lives in a different city, and when Joe was playing bass we had to work around the Rise Against tour schedule. But, we’ve been pretty prolific with writing, and when we get together, we give it everything! 3 EPs, 2 7″s, and an album is a lot of musical output. We’ve been talking about playing live this year, and even trying to tour. I’d like to play some of the HC festivals that happen these days.

Corey: Since you guys don’t play together super often, was the recording process for this record challenging at all?

Jeff: No, not at all. We’ve got a pretty awesome chemistry between us.

Corey: How did you guys meet up with Jello?

Jeff: Vic’s known Jello for years, going back to the Articles of Faith/Dead Kennedys days.  I’ve been a fan of Alternative Tentacles since I was a kid, so I was really pushing for us to go with AT. When Jello was down to release the first EP, I was so stoked! It still feels so insane to me, like holding a record I’ve played on, and seeing the Bat logo, fuck man, it’s rad.

Corey: Is there anything you would like fans to know about the It’s Not What You Believe b/ Pain Killer 7”?

Jeff: I really love these songs, and we put it all on the line with the performances and gave it everything we had, so I hope people can feel that when they listen to the record.

Corey: What has been your best Dead Ending show experience? Worst?

Jeff: I think our first show playing Punk Rock Bowling in 2012 was my favorite. There was such a vibe with it being our first time playing live, everything was left on the stage. It was also rad to play my home town of Las Vegas as our first show. Worst, I don’t think there’s been a bad show. Anytime I get to play with these dudes, I’m happy.

Corey: There was a Dead Ending burger when Shoot The Messenger came out. Did you get one? How was it?

Jeff: It was awesome! I love Kuma’s, it was rad they did that. The burger was Bloody Mary themed! David at Kuma’s said they might make it available on weekends as part of the menu, so hopefully that happens. They were able to make it for me with the Impossible Burger patty(I’m vegetarian), it was so good.

Jeff: You’d probably want to talk to Vic more about that than me since he writes the lyrics. We all share the same political views more or less, but I don’t want to speak for Vic on what he’s trying to get across. Things are fucked right now though, I don’t feel very optimistic, so I try to focus that into the way I write the music.

Corey: Anything cool on Dead Ending’s horizon we should be looking out for?

Jeff: We’re hoping to release more music later this year, and like I was saying hopefully play more live. I believe all of us have more songs written, so we’ll see how it comes together.

Check out Dead Ending at their artist page for more info and upcoming tour dates. For even more take a look at their website!

Order your copy of (It’s Not) What You Believe b/w Painkiller in our online store now!