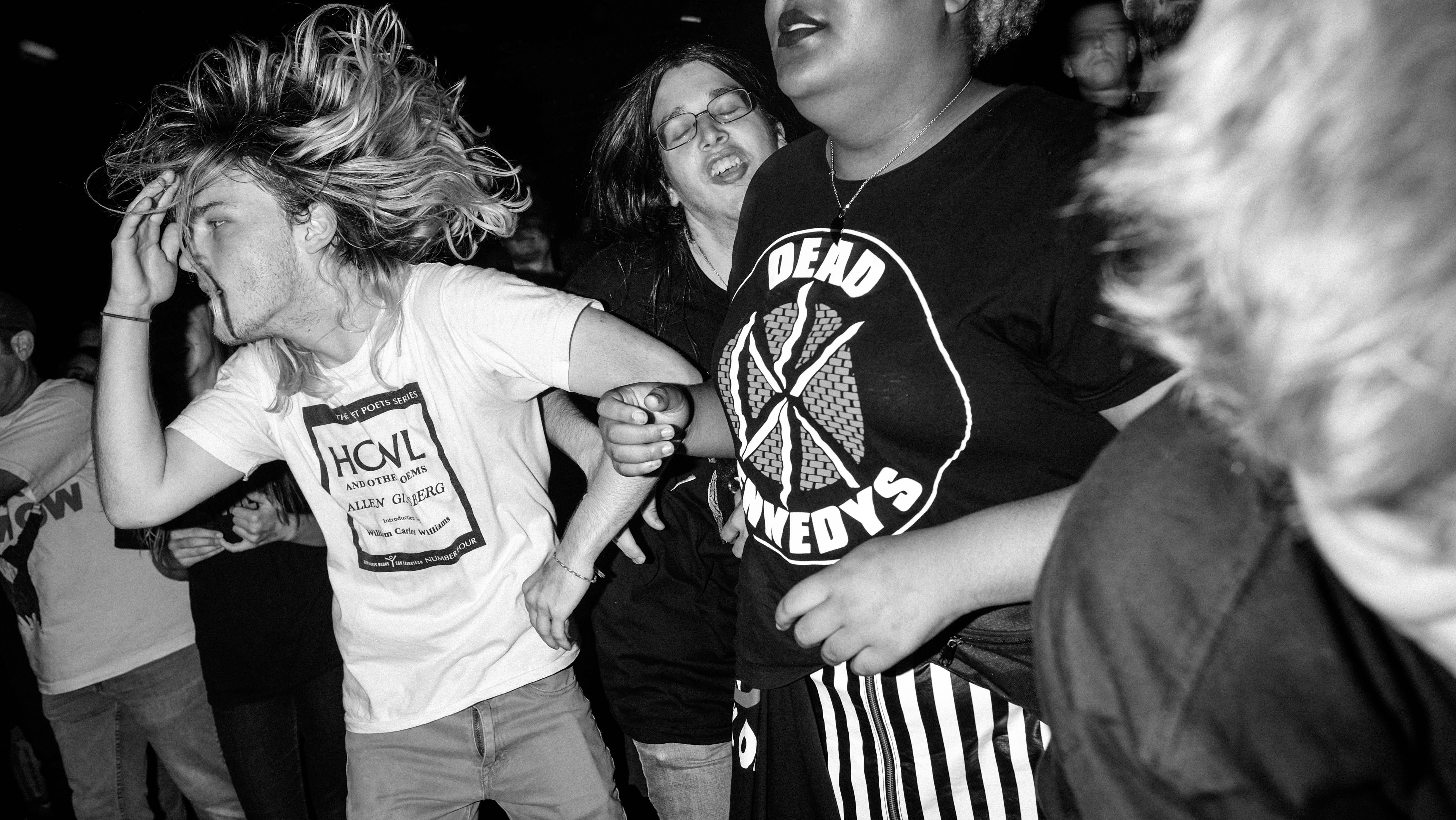 Amber Eby is part of the extended staff at Alternative Tentacles Records even though she pretends to just help us out when she wants to. She can be found petting dogs and cats at any number of Bay Area animal welfare organizations and gently discussing the virtues of a vegan diet.

Do you know what it’s like to feel disconnected with your home or an outsider in the place where you grew up?

Since you are reading an article from something that has “alternative” in its name, I’m going to make a not so wild guess that you have.

I definitely know that I rarely felt comfortable in the place where I came of age.  To say we were persecuted for just for existing would be an insult to anyone who has truly been persecuted.  Hurtful to those who have had to fight to survive simply because of their religion, their sex, the color of their skin or the circumstances into which they didn’t ask to be born.

And I can say with certainty that we did experience discrimination.  My husband (who was my boyfriend at the time) got beat up multiple times because of his appearance.  He was the only boy with a Mohawk for miles and wore skinny jeans at a time when you would not find them at the Gap.  While it made me realize he was my soulmate the minute I saw him balancing an art portfolio while smoking a cigarette on a skateboard, it also meant he got pushed off that skateboard and called a “fag.”  Of course, during the time when skinny jeans weren’t fashionable, “fag” was the go-to insult. My car was regularly vandalized because of the stickers on it.  My favorite was when someone broke my windows, defecated on the passenger seat, stole my license plate and left a note that literally said, “It’s OK to steal from terrorists.”  I think that this was in reference to the George W. Bush “Not my president” sticker.  Remember those?  I remember having to explain to my dad that my car was not in fact parked in a “bad neighborhood” but rather in the parking lot of the mall in a very white, very upper class neighborhood.

We had to laugh about some of it.  Joke’s on you car shitter – my entire work history has consisted of taking care of children, animals and drunk people.  There isn’t a scene at a daycare, animal shelter or bar with $2 “You Call Its” that doesn’t make removing poop from a Dodge Neon seem like another Tuesday morning.  But there were also more serious consequences.  We were both arrested, tried and convicted in situations where others were let go for the exact same crime.  And I know – even our “problems” reek of privilege – but my husband still doesn’t have a driver’s license from an incident that happened almost 15 years ago.

Of course, no one is able to chose the circumstance into which they are born.  Many people, like us, are born into places that don’t t easily allow them to be the truest version of themselves.  There was little opportunity for the work we wanted.  We were angry, we were outsiders, we were poor.

But  unlike many people we were lucky.  We are white, we are straight, we were middle class and college educated.  We weren’t running from religious persecution or war or famine.  We were running towards making student loan payments on time, health insurance and the ability to walk downtown after 11pm without being questioned by the police.  We could’ve assimilated and easily blended in.  We spoke the language, we knew the local customs – we just wanted to listen to “alternative” music, created our own stories and be free to have the Mohawks we wanted.  I’ll say it again, even our problems reek of privilege.

We were also allowed mobility and to move to a place that welcomed us.  A place that allowed us to express our beliefs.  A place with jobs that we enjoyed.  And even though we wanted this move and we spoke the language, it was still scary.  The customs were not ours, the streets were unfamiliar and the locals were unusual, even with all their Mohawks and skinny jeans.

But we were welcomed…or at least not turned away or greeted with further discrimination.  And I fell love in love with the place we moved to.  I love that no one defecates in my car, because they are too busy pooping in the unisex, gender neutral bathrooms that are the norm.  And while I admit that there were a lot of reasons I felt disconnected, it’s important to acknowledge that for me and for many, home will always be home.  It is a hard decision to leave home no matter what you running from or what you are running towards.

There are pieces of home that you can’t bring with you, no matter how much you are allowed to carry.  Things that aren’t everywhere, like fireflies and summer nights that stay warm after the sun goes down.  Things you can’t replicate, like a niece who saves a mini snowman for you in the freezer in case you come home after the snow melts. The realization that our parents age in between each of our visits.  The French fries from the bar we worked at.

But unlike many people, we continue to be lucky.  We continue to have privilege.  We are allowed to go home.  We can go see the fireflies and the niece who chases them while we unpack the snowman.  We can sit outside on warm summer nights with our parents, eat those French fries together, and know that we have them a little bit longer.   And we can also easily return to the place that welcomed us and allowed us to be ourselves.  We are not denied entry.  We have to the ability to move between the two.

It is easy to forget that we are lucky.  It’s easy to overlook our privilege and ignore the fact that there are so many others who are truly being persecuted and cannot blend in.  Others who cannot just change their jeans and cut their Mohawk to avoid discrimination.  Who are not simply looking for a better life, but fighting for their lives.  Others who do not know the language and are denied entry and not welcomed.  And still others who are not able to visit the place that will always be home and easily return to the place that has become home.

Without empathy, without remembering and without action, we put up walls.  We separate families. We ban nations of people.  We insult those who are truly persecuted.

2 comments on "…BUT WE WERE LUCKY by Amber Eby"