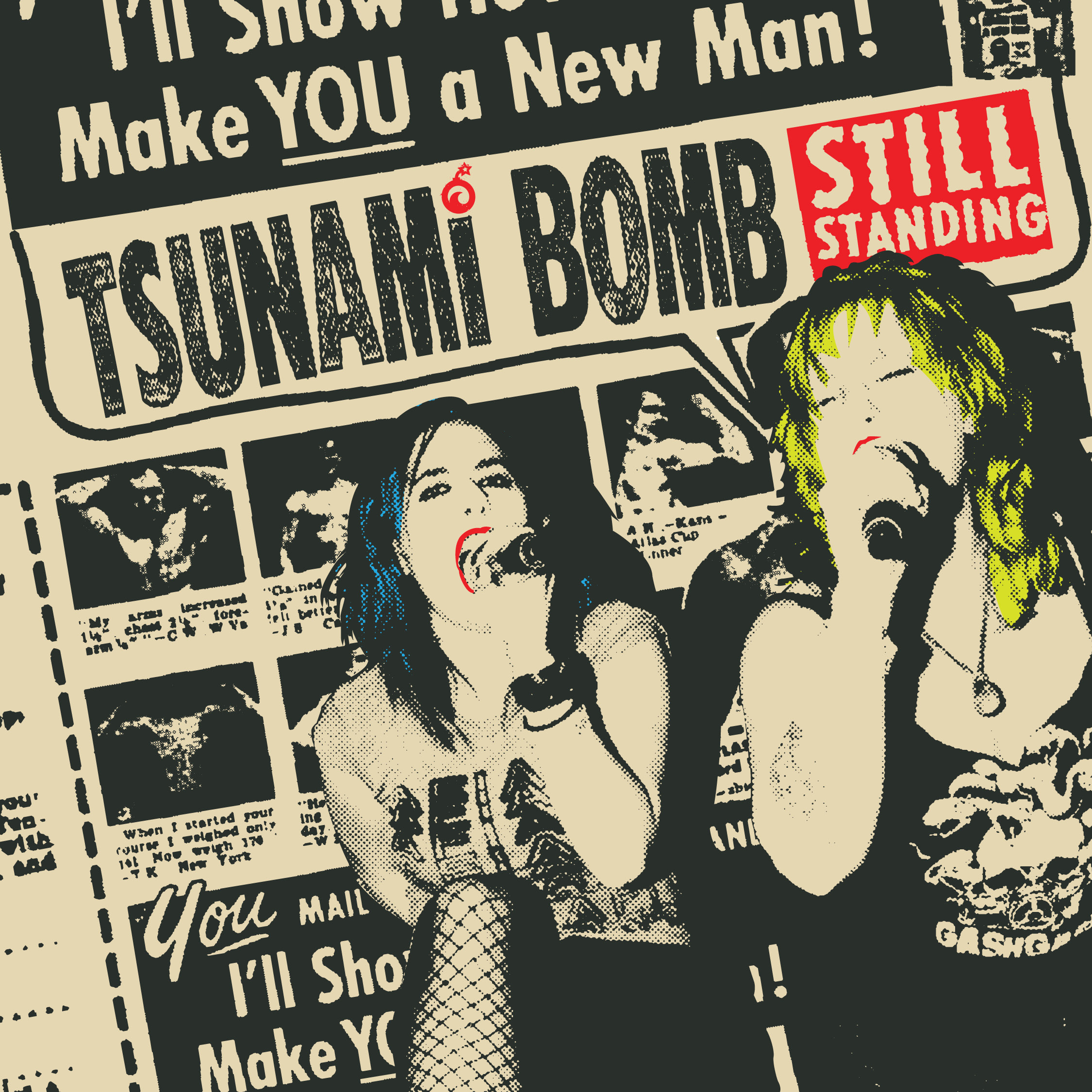 The 7″ Club continues with our first new release of the year!

As you all know, our 7″ Club will send out one 7″ a month, either a brand new 7″ or a classic from our discography. You can join anytime and you will get 12 surprise 7″ records. It’s a perfect way to discover new music, get mail, and build up your AT collection! This month we showcase Tsunami Bomb “Still Standing”!

Following up their emphatic return on the 2019 LP “The Spine That Binds”, Tsunami Bomb wanted to revisit two of their classic songs as a gift for their street team, The Bomb Squad.  The Irish jig driven “Irish Boys” is a live show favorite, but only previously available on a bedroom made 4 track recording from 1999. Keyboardist and co-vocalist Oobliette Sparks takes lead on this track, firing lines back and forth with vocalist Kate Jacobi, as the song screams through it’s bittersweet tale of both shoes and evening plans drunkenly destroyed.

Another Tsunami Bomb beloved classic gets a revisit with “El Diablo”, a song that was co-written by Oobliette who had sadly left the band by the time it was originally recorded. The keyboards return with a vengeance making you wonder how they could have ever not been present.

“El Diablo was the very last song I wrote with Tsunami Bomb and I always regretted not having a recorded version with the keyboards. Although I was always a part of the song, keyboards or not, it’s good to finally be represented in the way that I chose to, with Kate, who knocks it out of the park BTW.”

That’s just side A! Side B has two tracks exclusive to the vinyl, from a bootleg recording of the band in New York in 2018! If you have never seen Tsunami Bomb live, the shows are notorious for being packed, sweaty sing-alongs, and that is very much on display here. On two of their most popular songs of all time, “Take The Reins” and “Lemonade” the band is almost drowned out by the East Coast crowd who screams every word back at them.

“El Diablo and Irish Boys are my favorite songs to play. I’m excited now that we get to share these versions beyond our live sets. I love the energy in the live tracks. For Lemonade, we had fans with us on stage and it was a big, sweaty, fantastic singalong!”

While the “Still Standing” 7” was supposed to be just for their street team, Jello Biafra caught wind of it and insisted it be released on Alternative Tentacles, allowing the world to hear this new classic from Tsunami Bomb.

“When we first started touring, half of these songs were staples in our set, not only because we liked them, but because we needed them to fill out a respectable set. Later, as we wrote and released more songs, we found ourselves dropping certain ones to meet time constraints. Others were dropped as members changed. What this release highlights for me is a reunion of some of my personal favorite songs from different eras of the band, and more importantly, the reunion of what and who the band has always been in spirit. It’s hitting repeat on some of the best times and memories that I’ve had, and cementing it with some of my best friends who I’m infinitely lucky to share the stage with.”

Get your own copy of “Still Standing”