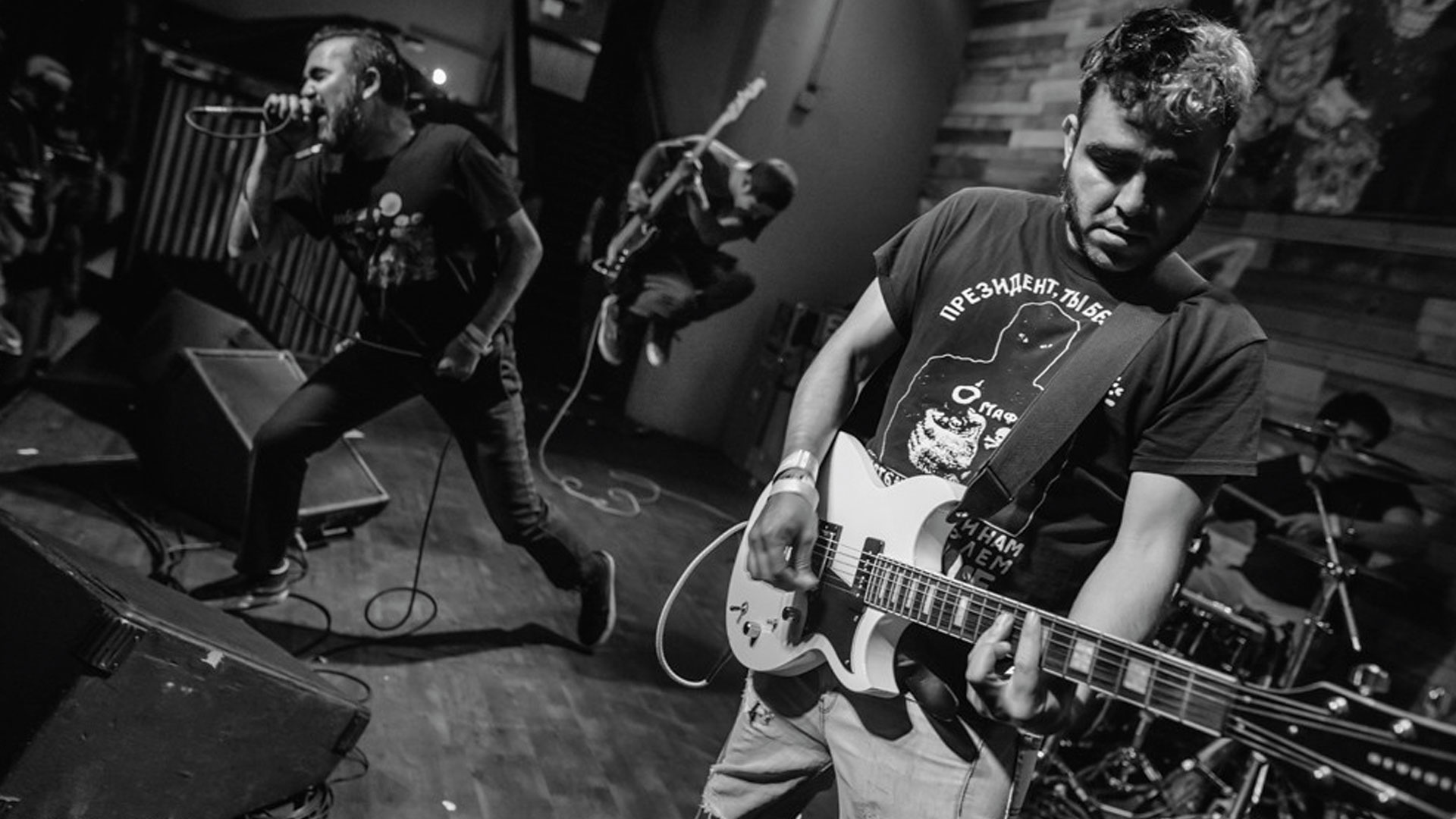 From the streets of Tijuana, Mexican rock n’ roll punkers DFMK has emerged with their very first 7″ Dame Peligro on Alternative Tentacles Records on May 20th, 2022! The driving tempos, high octane vocals, melodic riffs, and raw leads will entice any hardcore punk fans to dive in deep with DFMK!

This is the first release of the 7″ Club! If you are a member, you already have a limited edition red 7″ on it’s way! Find out more about the 7″ Club here!

Get a copy of the limited web-store exclusive 7″ red vinyl while supplies last!

WHAT IN GOD’S NAME DOES DFMK MEAN?!

Tijuana Mexico, besides being the most visited border in the world, having donkeys disguised as zebras and being a haven for drugs, cheap prostitution and crime, it can sometimes be the cradle of some of the most underrated rock and roll in Mexico.  I mean, even Santana learned how to play guitar in the downtown strip clubs and no one else, besides we locals, know that. This statement can be well attested to in the all out chord attack of DFMK’s Rock & Roll sound.

The band was started several years back in 2009, by Marco as the bass player and Angel as the guitar player, in the efforts to be a hardcore punk super group, unafraid to display a little 70’s riff based rock influence (ala Black Sabbath). There were a lot of line-up changes back in those days, including people entering and exiting the band like it was a fucking cheap motel, leaving only Marco and Angel as the original remaining members. It took a lot of substance experimentation, wild partying, prison and detox hospitals to get the band back on track and with a sound set on simple Rock n’ Roll with that Punk Rock attitude.

Having gone through all that trouble, they finally found a lasting and solid line up in Marco’s sibling, Alex, teaming up with his previously mentioned elder on the rhythm section playing drums. A gnarly dude that goes by a lot of aliases, but better known as Boti, joined later on second guitar, which brought a cleaner, more Ramonesque guitar approach with a slight touch of surf to the band’s sound. And last but not least, the vocalist and the main man on stage, Mr. Cap aka Cachuchin, unashamed to reveal a soulful and emotive singing style, similar to early proto-punk singers, in its own way. With these five elements they set out to go beyond the limits of all time low rock & roll standards. The lyrical themes vary as widely as each member’s personal experience. You don’t get Political Punk statements, Youth Anthems or Whiny songs about love and break ups, simply, a straightforward, I don’t give a fuck attitude.

In regards to the name DFMK, it really does not mean anything in particular, long time ago when Marco and Angel started the band they had a name for their crew which was named “Diario Fumo Mota Krew” or “Diario Fumo Mota Karnal”, which loosely  it translates to “Daily I Smoke Weed Crew” or “Daily I Smoke Weed, Brother”. However, in time it really lost its meaning and is encourage to for anybody to create their own interpretations, here are some examples:

At the end the name does not matter, what matters is if you ROCK, do not forget to ROLL with the music that you create.