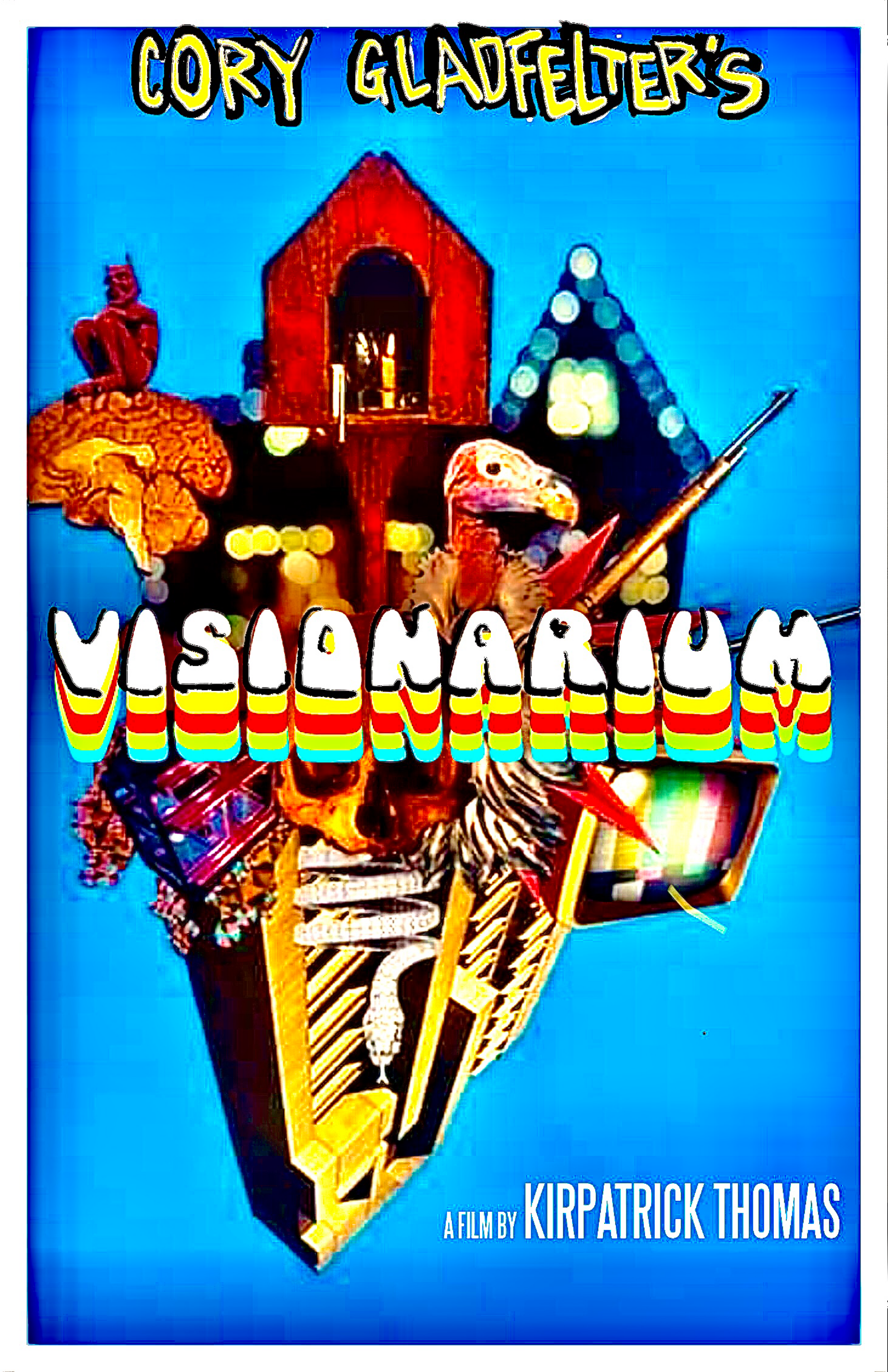 PLEASE PLEASE PLEASE Before reading / viewing on, take a gander at some of Corys many works of art at either of the links here!!! Get inspired! Give him some cred!

Greetings my friends, my name is Kirpatrick Thomas. I devote most of my time building conceptual ideas for the long term musical art project known as SPINDRIFT. Now that you’ve had a chance to familiarize yourselves with the VISIONARIUM let’s get started….

From the earliest days of SPINDRIFT’s inception, artist, friend, roadie, and confidant Cory Gladfelter has always been there to give us that little extra bit of inspiration, humor, and friendly loving companionship. Yet, this whole time, we just knew he had an artistic skeleton  hiding in the proverbial closet!  FINALLY in 2022, with our tune “VISIONARIUM“ (featured on the new Alternative Tentacles Records album SPINDRIFT “Classic Soundtracks Vol. 3”!) we are happy to announce our collaborative efforts combining a cinematic documentary film score  with his many many visually mind bending pastiche works of art!

Some years ago, we re-settled in Los Angeles, slowly but surely leaving our East Coast,  Delawarean  roots behind.  Over the last 20 years, not only did our friends and fans get shuffled but our musical influences also  shifted from shoegaze inspired psychedelic retro Doors-y 60’s punk Space-rock to the far out cinematic Western  Ennio Morricone influenced film score a la lost in a ghost town on acid style we are more known for now. (Oh, so easily explained!!!) Ha!

(((Well, that’s at least what I read somewhere. Wikipedia def does NOT do it justice. )))

Hence, it was nice to see our old Delawarean buddy Cory Gladfelter still at it, viscously cranking out his newly inspired project.  We felt we’d been connected via psyche. Right there with him all along.

Cory’s  “VISIONARIUM“ is an immense collection of what he may call “simple collage switch-blade art” and yes, this surrealist collage medium has definitely been done before,  however that is the last thing you will think of when you gaze upon the many wildly geocentric works of genius!

Titles :  “Magazine Mutilated by Switchblade, The Asylum Within, Secret Agent Eyeball, Hypnochamber, An Anthem for Overthinking, Insight for Sale”, and let’s  not over exaggerating the   “Defunct Scintillating Perfunctory Astringent Sanctifying Juncture” all give the sense of disjointed anarchy with a need for resolve through simplification. Something today’s art world vastly needs. Can one rise above the mediocre and let’s bring on the new Gladfelter VISIONARIUM!?! It is time!

How else to explain it?

2. Movement, via Explosions, water, fluid swooshing away, with a conductor mostly represented at the helm (in this case we’re reluctantly on board with our skull friend).

3. Fungi – an element of psychedelia (as with most surrealism intentional or not)  represented throughout his works.

4. Most commonly encompassed within a diamond , or pyramid shape (definitely not always but often).

6. SUBCONSCIOUS. The point where we wonder what’s what within the reality dream state question mark we are captive in. Yes, you’ve reached Captain Beefheart Trout Mask Replicesque Nirvana force factor 5!

7. Just to break it down: This stuff is awesome! What’s not to like about a modern day surrealistic pillow pattern created via by a well centered geometrically subjugated collage punk art guy!

*****I’m definitely not an art critic, or a writer, and most definitely NOT a music video editor / Director but I do know this; his works were enough for SPINDRIFT to write/ record/ release a musical equivalent to allow some form of a way to give his VISIONARIUM musical/visual documentary representation and in today’s world, that is plenty enough!